Information regarding patents and patent applications is important for a variety of business activities occurring in the intellectual property marketplace. For example, a prosecution-oriented prior art search, or a litigation-oriented infringement analysis, or even a research project focused on landscaping for strategic business intelligence, all require access to patent information resources. Google’s combination of its BigQuery data warehouse service along with its public patent datasets is providing a new type of patent information resource that’s better positioned for the growing trend of integrating patent information together with data science programmatic analysis for more customized solutions by data-savvy practitioners.

Google’s BigQuery and patent datasets are different from other resources because of its combination of cost and capabilities. It’s inexpensive, as no subscription is required to access the patent information beyond the basic BigQuery data access fees. In fact, for BigQuery the first 1 TB of access per user, per month, is free and then billed at only $5.00 per terabyte thereafter. In addition, the patent datasets are provided as ready-made SQL databases, through Google’s cloud services, and thus don’t require the user to import or manage their own database. BigQuery is also accessible via all the popular analytics analysis platforms such as Google Data Studio, Tableau, Looker, Excel, and others. Finally, BigQuery provides programmatic access to the patent data (via SQL queries and REST APIs for Java, .NET, and Python) as a valuable capability to enable customized data science applications such as user-defined semantic analysis and machine learning functions.

In contrast, other third-party resources that provide programmatic access to large patent databases for customized data science applications, or provide more ready-made functions for sophisticated analysis, are all more expensive subscription services. In addition, resources that provide free patent information, typically do so via a limited Web interface and / or via downloadable datasets where the user is required to manage their own database.

Google’s BigQuery and its patent datasets are thus a cost effective and powerful platform for patent research and analysis. The first steps toward utilizing this platform are to understand what’s included in the datasets and how to execute the fundamental SQL query methods of access. Overall there are 19 different datasets spanning information such as patent classifications, standards essential patents, chemical compounds, patented drugs, patent litigation, patent publications, and more. This report is a tutorial on exploring and characterizing specifically the “patents.publications” dataset and on exemplifying a simple keyword phrase SQL query as a basis for more sophisticated patent analysis.

Most data science projects begin with an analysis of the problem or issue to be addressed and follow that with the preparatory data collecting, formatting and cleaning, all before any insightful analysis begins. But with Google’s BigQuery and the public patent datasets, that preliminary work is not needed. However, that still doesn’t mean a user can jump directly into insightful analysis. An understanding of the data that’s available is required.

Google’s “patents.publications” dataset, accessible via a Google Cloud Portal account, contains bibliographic information from a very broad set of worldwide patents as well as full-text information for U.S. patents. On the “Details” tab of the dataset description, you’ll find the size of the table, the number of rows, and the date when the table was last updated. On the “Schema” and “Preview” tabs you’ll find a brief description of every field in the dataset and an example record.

Characterizing the datasets further requires some basic data exploration via SQL queries. For the patents.publication dataset, its insightful to initially query for the date and geographic coverage to get a feel for the timeliness and global breadth of the information. Then, to enable the keyword phrase queries, it’s useful to explore some text fields on which those queries can be executed.

Query #1 below looks for the MIN and MAX patent publication dates, which shows the earliest publication date of July 4, 1782 and the most recent date of Sept 11, 2018. A similar query can be written for MIN and MAX patent grant dates. These are shown in Figure 1. Google Data Studio is used as the presentation medium, so the figures below are screen-shots of the report pages. The live embedded report can be view on the Moeller Ventures website at the following link. https://www.moellerventures.com/index.php/CharGPatPubDataPatentsPublications. 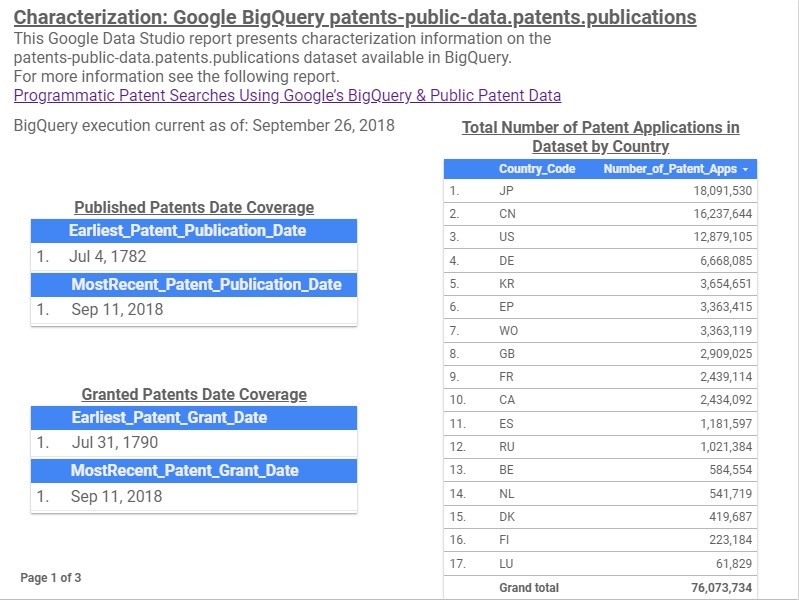 Query #2 below helps gain an understanding of the geographic coverage of the dataset by showing the total number of patent applications by country. A similar query can be used to list the number of granted patents. These tables are shown in Figure 1 and Figure 2. Note that the granted patents table includes both Utility and Design patents. 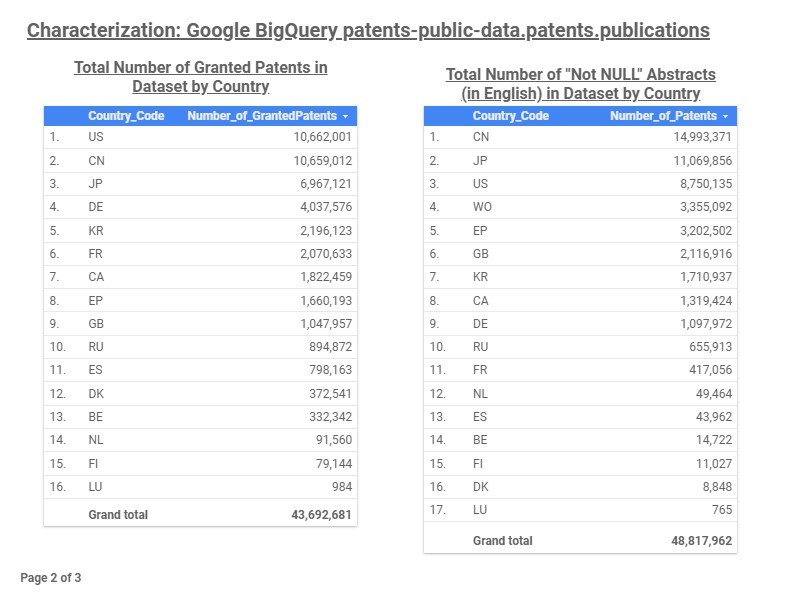 Finally, Query #3 is used to find text fields on which keyword phrase queries can be executed. This query lists the total number of patents, by country, that had an English abstract that was not empty (i.e. Not NULL). That table is also shown in Figure 2. This table shows that there are English patent abstracts for ~49 million of the ~76 million patent applications present in the dataset. As a further verification of the data, a similar Not NULL query can be executed on the patent claims field and the patent description field. Those results are shown in Figure 3 and, as expected, only show a result for the U.S., since the dataset only includes bibliographic patent information (no claims or descriptions) for non-U.S. patents.

Query #4 implements that keyword phrase, time-series data search and uses the keyword phrase of “internet of things”. That keyword phrase was chosen because it’s a relative new patent literature term within the last decade, but the query can be modified to search for any keyword phrase. In addition, the WHERE clause of Query #4 can be used to limit the search to a particular country or it can be removed to show worldwide results.

So, Figure 4 shows the histogram of the phrase “internet of things” from a global patent application perspective and, while difficult to observe on the chart because of the scale, indicates that the earliest patent literature usage (at least in the abstract) was in December of 2007, but the term really started to get popular midyear 2010 and continues to ramp through 2017. Figure 5 shows the results specifically for the U.S. across the ~8.7 million U.S. patent applications and indicates peak usage approximately midyear 2016. The live embedded report can be viewed at the following link; https://www.moellerventures.com/index.php/GPatPubDataIoTKeyPhrase.

-- This counts the number of U.S. patents matching the phrase on a monthly basis. 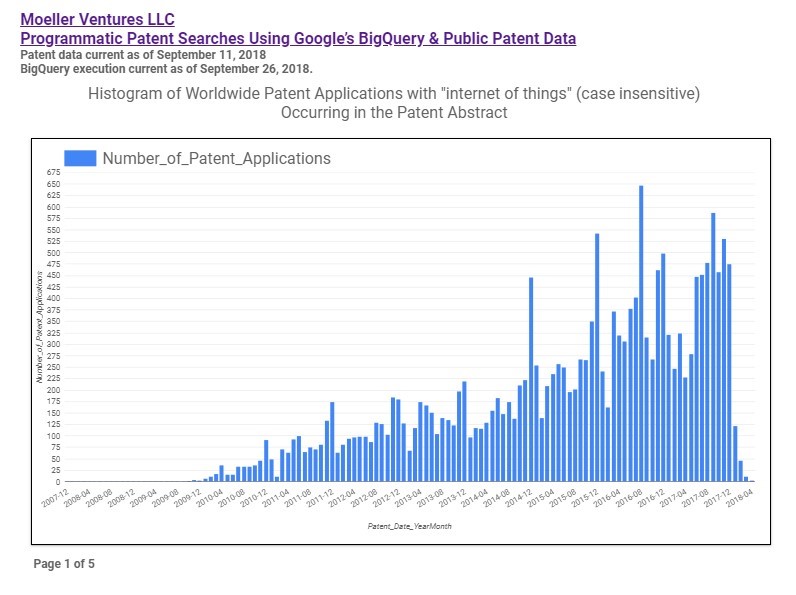 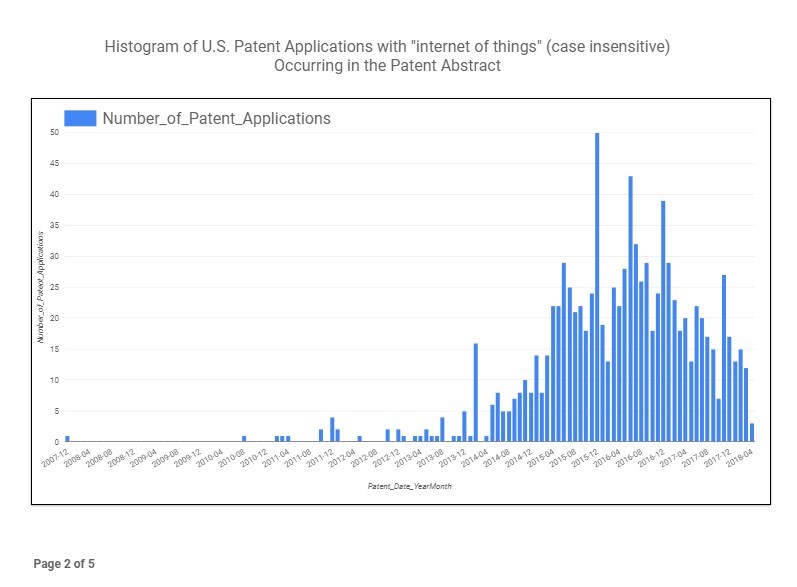 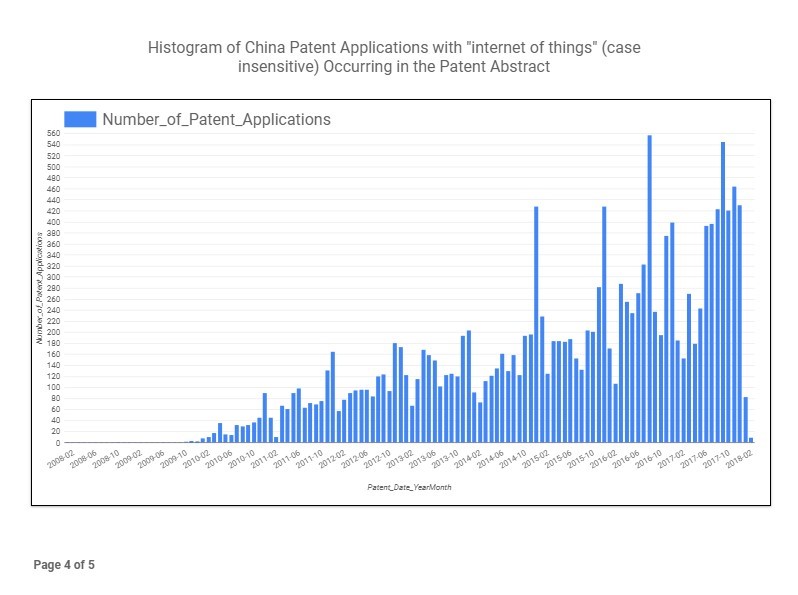