INNOVATE is the online magazine by and for AIPLA members from IP law students all the way through retired practitioners. Designed as an online publication, INNOVATE features magazine-like articles of 500-1,500 words in length on a wide variety of topics in IP law.

Articles submitted to innovate@aipla.org are reviewed by an ad-hoc sub-committee of volunteers from AIPLA's Special Committee on Publications, the Fellows Committee, and other AIPLA peers. The review process ensures submitted articles follow the Guidelines for Article Submission. Approved articles are published quarterly.

Don’t miss your chance to be published with AIPLA’s INNOVATE! Email your article submission to innovate@aipla.org to be considered for the next edition.﻿

A recent precedential Federal Circuit decision in In re FOX Factory Inc. v. SRAM LLC, Fed. Cir., No. 18-2024 (Dec. 18, 2019), In re Fox has some takeaways for corporate marketing teams, and serves as a reminder to patent practitioners on the value of including at least one narrow patent claim in your patent application almost exactly covering a product that is, or is likely to be, commercially successful.

The Legal Dispute between Fox and SRAM

Fox Factory, Inc. (“Fox”) had filed two inter partes reviews (IPRs) for U.S. Patent No. 9,182,027 (“the ’027 patent”), owned by SRAM LLC (“SRAM”), collectively asserting that the claims were obvious in view of prior art references.  The Patent Trial and Appeal Board (PTAB) found that the independent claim limitations were disclosed in those references, but concluded that Fox had not shown the obviousness of claims based on secondary considerations.  The PTAB agreed with SRAM’s “strong overall showing of objective indicia of non-obviousness.”  Fox appealed and the Federal Circuit vacated the PTAB’s decision saying that SRAM’s evidence of secondary considerations was not sufficient to prove a nexus between the independent claims and the commercial success of the product in question.

The Product(s) and the Technical Problem Solved

SRAM, LLC makes bicycle chainrings to which bicycle crank arms are attached.  Bicycle chains have the problem of disengaging from the chainring, especially for geared bicycles.  SRAM’s X-SYNC™ chainring has structures that address this problem.  Specifically, the chainring has alternating narrow and wide tooth tips offset from the center of the chainring that provide better retention.  The offset could be away from the bicycle body (“outboard”) or towards the body (“inboard”).  Out of the thirteen different versions of the X-SYNC™ chainrings sold, only one embodies the outboard offsets.  The image below from the ’027 patent shows the outboard side (“54”) and the inboard side (“56”). 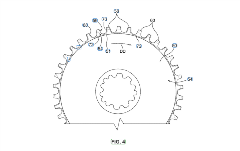 The challenged claims are directed toward outboard offsets shown above, with claim 1 being representative (emphasis added):


Claim 7 is directed to the inboard offset, and was challenged on similar grounds in a separate IPR, with similar outcomes at the PTAB.

The specification of the ’027 patent explains that the two groups of teeth (narrow and wide) fill at least 80% of the axial space of the chain link, a feature that was claimed in a different continuation patent 9,291,250 (“the ’250 patent”)  by SRAM.  In a separate third IPR for the ’250 patent, this 80% feature was touted by SRAM as a part of a critical feature in a “combination of features” that results in the desired retention of the chains to the chainrings.  In other words, the X-SYNC™ chainring would not be complete in its desirability and functionality solely on the basis of the narrow and wide teeth being offset in the outboard direction, and the teeth must also be distributed in the unclaimed 80% axial gap-filling arrangement.

In its non-obviousness defense at the PTAB, SRAM submitted secondary considerations in the form of evidence pertaining to the X-SYNC™ products, and argued that the claims broadly cover the product, meeting the coextensiveness requirement to prove nexus between the actual product and the claims.  This evidence included marketing materials showing different features that materially impact the functioning of the chainrings, leading to the commercial success of the chainrings.  Commercial success of the product can be a part of secondary criteria for non-obviousness of claims.  The PTAB rejected Fox’s argument that the product included numerous unclaimed features (e.g., the aforementioned 80% gap filling feature) and therefore were not coextensive with the claims.  The PTAB concluded that based on its analysis of secondary considerations, Fox had not shown that the challenged claims of the ’027 patent would have been obvious

The Federal Circuit sided with Fox, vacating the PTAB’s conclusion.  Generally, the Federal Circuit provided analysis on how SRAM had failed to show that a nexus exists between the patented invention and the commercial success of SRAM’s XSYNCTM bicycle chain rings.  The Federal circuit acknowledged that there is rarely a perfect correspondence between the claimed invention and the product.  However, if the product has unclaimed features that are insignificant, then nexus can be appropriately presumed.

In SRAM’s chainring, the Federal Circuit found that this was not the case, because the disputed ’027 claim had no language to the 80% gap filling feature, touted by SRAM as being a critical feature of the chainring in another IPR to a different patent.  Therefore, no nexus can be presumed and the product was not coextensive with the independent claim above.

Further, the marketing materials demonstrated additional features in the product, each materially impacting the functioning of the chainring.  One such feature was the presence of mud-clearing recesses on the chainring that also help retaining the chain “no matter what conditions.”  The Federal Circuit noted that these additional features were also not in the claims, but were clearly touted as being critical in retaining the chains in the submitted marketing materials.

Specifically, on page 14 of the decision, the Federal Circuit points to language used in marketing materials to side with Fox’s contention that certain features in the independent claims were not the only reasons as to why SRAM’s X-SYNC™ product was a commercial success.  In other words, the Federal Circuit concludes that if the product had critical features beyond those recited by the independent claims, which additional features contributed to the commercial success, no nexus can be presumed between the product and the patent claims.

One takeaway here for patent practitioners (whether in-house or advising clients) is to advise the corporate marketing department on considering a tiered promotional strategy focusing on different features that make the product successful, without at the same time, calling them to be critical to the product.  Let the customer and the market provide feedback regarding what they think is critical or desirable, and what is not.  The patent practitioner could work with the marketing team to document industry praise and customer feedback received for important products.  While secondary considerations to prove non-obviousness are generally hard to prove, such focused documentation may be useful in proving so, and in showing the co-extensiveness of a patent claim (albeit narrow) with the successful product, thereby helping to meet the nexus prong of the secondary non-obviousness criteria inquiry.  At the same time, care must be taken on how the marketing team may advertise or promote a product, since statements made in such promotions may be used for, or against, a patentee in proving the secondary considerations in an obviousness analysis.

From a claims perspective, this case affirms the need to consider at least one narrow claim that explicitly covers a product (eventually and/or potentially a commercial success).  This may not be always possible at the time of the first filing, but is likely achievable via one or more continuations a couple of years down the line, e.g., when the initial patent application is allowed.  This takeaway runs against the general tendency and the temptation to have broader claims, whether in a continuation or the parent.  Although broad claims are clearly valuable, ignoring a narrow “laundry list” style claim could be risky, as that claim may prove useful in proving nexus and co-extensiveness between the claim language and the successful product for an obviousness analysis that relies on secondary factors such as commercial success of the product.

Finally, in the event of parallel IPR proceedings, this case points to the fact that statements made in support of a particular position could come back to haunt the patentee, as happened in SRAM’s case.

Shubhrangshu Sengupta is a patent Agent with US Conec, Ltd. in Hickory, NC where he handles patent matters for engineers designing passive optical and opto-mechanical components.  He has been practicing patent prosecution for over ten years both at law firms and at his current employer.  His technical background is in Electrical Engineering.