Are there Multiple Experimental Use Standards?

Researchers and physicians are often the greatest sources of both excitement and pain for in-house patent counsel—they zealously create inventions that save lives and improve quality of living; inventions that inspire admiration. 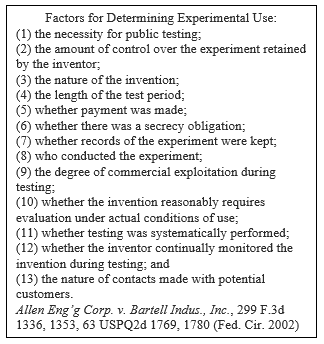 But those same researchers and physicians can inadvertently destroy patentability through uncoordinated testing. In particular, using a medical invention to treat a patient can create damaging prior art if conducted prior to the critical date (35 USC 102). U.S. practitioners have long analyzed the patentability-destroying effects of testing using the thirteen factors set out in Allen Eng’g Corp. Allen Eng’g Corp. v. Bartell Indus., Inc., 299 F.3d 1336, 1353, 63 USPQ2d 1769, 1780 (Fed. Cir. 2002) (listed in the box at right). But the Federal Circuit suggested in Mark A. Barry v. Medtronic, 914 F.3d 1310 (Fed. Cir. 2019) that courts should perform different types of analyses for different types of claims. The Barry opinion offers practical lessons for implementing strategies and for drafting claims to avoid creating circumstances evidencing public use.

At issue in Barry was whether physician Dr. Mark Barry’s use of his invention prior to the critical date (December 30, 2003) was a public use within the meaning of 35 U.S.C. § 102, or whether it was an experimental use, such that it did not destroy novelty. The patent at issue included method, device, and system claims covering spine surgery derotation components and tools. In the practice of the invention, some components remain in a patient following a surgery while others do not (e.g., first and second pedicle screw cluster derotation tools, Barry, 914 F.3d at 1330). The timing and purpose for each use of Dr. Barry’s invention prior to the date of the patent application would determine patentability under 35 U.S.C. § 102.

Dr. Barry developed the components and tools in 2002 and 2003 to address scoliosis-caused spinal deviation conditions. He first used the tools in three surgeries during August and October of 2003; procedures that he alleged were necessary for testing the tools on three types of spinal conditions. Dr. Barry then saw each of the patients for regular follow-up appointments to determine if the tools fixed each patient’s conditions. After being satisfied that the tools “functioned for [their] intended purpose,” Dr. Barry submitted a summary and abstract describing the tools to a conference selection committee on February 1, 2004. He later filed a corresponding patent application containing system and method claims on December 30, 2004. Thus, the court faced the question of whether the 2003 surgeries were prior art against Dr. Barry’s application under 35 U.S.C. § 102 as public uses before the critical date or were experimental uses that did not destroy patentability.

The Federal Circuit found that the Dr. Barry’s control over 2003 surgeries was consistent with experimental use. Dr. Barry’s control over the system’s testing (Allen Factor #2) was “critically important” for finding experimental use. In particular, Dr. Barry did not relinquish control of the later-claimed tools or process (i.e., articles or method) because he was the only person to perform the surgeries (Barry, 914 F.3d at 1327). Therefore, the court held that Dr. Barry’s patent was not invalid.

But the court also noted that control of devices and systems differs from control of methods. In particular, previous cases that turned on the experimental nature of using a product involved claims covering devices, not methods (id., at 1330). At least one court has since suggested that more controls would be necessary to establish that testing of products likely to be claimed as devices was not public than would be necessary for testing of methods. (e.g., see BAM Bags, LLC v. ZIP-IT Ltd., 15 Civ. 2172 (ER) (S.D.N.Y. Jun. 26, 2019).

Studying the experimental controls in Barry can help a practitioner determine how the controls might translate to other technologies. Each experimental control will most likely vary by the technological field and context of each experiment (see, e.g., the surgeries did not “plac[e] the invention in the public domain . . . inconsistent with experimentation” of the invention, Barry at 1330). In the medical field, for example, the existence of strict data and privacy regulations (e.g., HIPAA) might weigh in favor of finding that control was exercised and that there existed an understanding that the patient’s data was confidential.

A practitioner can identify which experimental controls may increase the likelihood of a court finding experimental, not public, by analyzing the context and facts and of Barry. For example, were Dr. Barry’s patients ever in control of the surgically implanted spinal screw, even after the satisfactory follow-up appointments? Looking at other technology areas, should inventors remove publicly-visible test components, such as a prototype rooftop satellite or a field fiber optic component, after successful testing? And should programmers take steps to obfuscate identifiable metadata of experimental code following successful tests on public channels (see Netscape Comms. Corp. v. Konrad, 235 F.3d 1315, Fed. Cir. 2002) (stating that, pre-AIA, the “inventor always retained control over the use of the device as well as over the distribution of information concerning it” was a factor for determining experimental use)?

Each technology area and its research or clinical context will frame questions of experimental control that may affect patentability. Counsel should work with researchers and physicians to identify the issues underlying these questions and try to prevent unintended public uses that could damage their inventions’ patentability. Knowing those issues, prospective patent applicants can implement proactive or reactive strategies to mitigate risks to patentability.

A patent applicant’s counsel can offer a variety of strategies to mitigate patentability risks resulting from testing an invention. Each strategy should be tailored to the facts and context of the tests, including technology area. A common suitable strategy is filing a patent application before conducting tests. This requires that patent counsel understand the experimenter’s testing activities and protocols, regularly seek and capture invention disclosures, and file patent applications as early as possible. These time-intensive practices are invaluable for mitigating patentability risks under 35 U.S.C. § 102.

Counsel, whether in-house or outside, should also foster a culture of innovation and develop working relationships with inventors to facilitate timely patent filings. These relationships generally require regular communication to discuss ongoing experiments to determine if inventions are ready for patenting. These regular communications can also be time-consuming in larger or resource-constrained organizations, but may bolster the value of patent applications.

Following tests, counsel can take steps to strengthen arguments that pre-filing use was experimental, not public, under other Allen factors. Examples are (1) including provisions in written agreements that clarify such things as the secrecy obligations and the terms of payment for the conventional portion and experimental portion of the device’s or method’s use and, (2) as appropriate, by using separate invoices and descriptions for each commercial and experimental portion of the use. Written confidentially agreements and memoranda of understanding may be required to insulate the testing from possible “public use” challenges when circumstances fit Allen Factors #6 and #7 (supra), while other testing may require only informal understandings of confidentiality (Barry, 914 F.3d at 1327) (citing Dey, L.P. v. Sunovion Pharm., Inc., 715 F.3d 1351, 1355-56 (Fed. Cir. 2013) that “an accessibility determination may be rejected where the evidence establishes a sufficient obligation of confidentiality, which can be implied rather than express.”). Further, counsel should suggest actions that may increase the likelihood that the pre-filing activity is experimental, such as documenting the modes and responsibilities of parties involved in the experiments, creating agreements that acknowledge experimentation, establishing requirements for documenting experimental methods and monitoring, and establishing costs of experimentation.

Counsel can also mitigate patentability risks created by prior testing using common claim drafting techniques. First, counsel can draft applications with a variety of claim types. If courts continue to differentiate experimental testing factors for articles of manufacture, methods, etc., then using various claim types in an application (or application family) can reduce the risk of losing all protection if case law negatively affects claims of one type. For example, commercially valuable protection may endure despite factors that might show an invalidating public use of the subject matter of one claim (e.g., device) yet show a safe experimental use of another (e.g., method). Second, counsel should scrutinize who is using and controlling the claimed invention during and after testing. Counsel should draft claims and written description to ensure that an inventor continuously controls the invention to increase the likelihood that a court will find experimental use during testing. However, counsel should also draft the claims carefully so that the inventor’s continuous control does not reduce the possibility of later asserting direct infringement because the claims require multiple parties (i.e., the inventor and others) to perform the claims.

Counsel can maximize the value and joy of working with researchers and experimenters while securing protection of inventions that save lives and improve quality of living. But efforts require consistent attention to on-going experimentation. Fortunately, many of the efforts that mitigate patentability risks are also the intellectually and professionally rewarding aspects of working closely with researchers and experimenters.

Dustin E. Lee is a patent attorney that specializes in medical devices, emerging technologies, and software at the University of Maryland, Baltimore - Office of Technology Transfer. Dustin received his BS in Engineering in Aerospace Engineering from the University of Michigan and JD from Michigan State University. He has engineering experience in integrated robotics systems and material technologies, and patent prosecution experience in the mechanical, computer, biomedical, and electrical arts. Dustin is an active member of the State Bar of Michigan, AIPLA, and is registered to practice before the USPTO.