Because of challenges posed by the current pandemic, and more so than at any time in its storied past, the American Intellectual Property Law Association needs leadership that combines a steady hand on the tiller and openness to creative solutions. With that challenge in mind, I am honored to introduce to you Joseph “Joe” Re as President of AIPLA.

Before explaining why I believe Joe is extraordinarily well-suited to lead the Association through the daunting next year, I must confess that Joe was introduced to the Association and its members in ignominious fashion, a debacle that I witnessed first-hand. Joe had come to the practice of law well-prepared. Both his parents were lawyers (his father, Hon. Edward Re, had long served as Chief Judge of Court of International Trade, and his mother was a surrogates attorney), and from them, and from his eleven siblings, Joe had absorbed innumerable lesson on the law and advocacy. After earning his law degree from his parents’ alma mater, St. John’s University, Joe served for two years as a judicial clerk for Hon. Howard Markey, then Chief Judge of the United States Court of Appeals for the Federal Circuit. I had served as a clerk down the hall from Joe those two years, and, in 1987, fresh off our clerkships, we both joined the then-small Newport Beach, California intellectual property boutique Knobbe Martens Olson & Bear. Name partner Don Martens urged Joe and me to actively participate in the work of our local and national bar associations, particularly AIPLA, and in that vein Don, Joe and I found ourselves together at a table at the Association’s 1987 Annual Meeting. Don, who would later become AIPLA President, had just made his first foray into committee leadership, and I was slated to receive the Association’s Watson Award for a student paper I had written. Toward the end of the evening, Robert Kline, AIPLA’s outgoing President, presented the award, and for the first time before a national IP audience introduced the small, relatively unknown California IP boutique. We swelled with pride in anticipation as Bob proceeded to clearly, emphatically, and in ringing tones, mangle the firm’s name as “Nobbely, Martinez, Olson and Burr of Newport, Rhode Island.”

Today, anyone involved in this country’s intellectual property practice is likely to be familiar with Knobbe Martens, one of the country’s largest and most successful IP boutiques with offices across the country. The firm’s growth and success is in no small part due to Joe’s contribution. Over the years, he has developed into an extraordinarily successful trial (especially jury) and appellate advocate. He has been oft-honored for his work, rightfully so, both regionally and nationally, garnering nouns such as “star,” “icon,” and “MVP,” and adjectives “top,” “super,” “leading,” “winning,” and “influential.” But you should not think of him as a mere patent trial and appellate lawyer, for he has earned deep experience in trademark, trade secret, copyright, and other cases as well. No one-dimensional litigator, through his practice Joe has delved into the legislative and administrative aspects of IP enough to recognize the importance of the Association’s work in those areas. As an early example, Joe developed a keen appreciation for the skills involved in patent preparation and prosecution from his involvement in Knobbe Martens’ program in which new litigation attorneys drafted and prosecuted patent and trademark applications (under appropriate supervision). Joe attacked his applications and their prosecution with zeal, and in one example that long predated the surge in patentable subject matter rejections, the young attorney marveled that after a tortuous prosecution he had manage to obtain a patent claim that read directly on the human finger.

So why am I so pleased that my longtime friend has ascended to the Association’s Presidency? I am confident that Joe’s long history of service to AIPLA—starting with his drafting effective and successful Supreme Court amicus briefs and culminating in service on the Board of Directors (including during my term as President) and as an officer, his decade of leadership with the Federal Circuit Bar Association—culminating in his presidency, and his long service on the United States Court of Appeals for the Federal Circuit’s Advisory Council, has equipped him for the position. He brings the necessary talents to the position: his warm and ebullient personality, keen intellect, and infectious sense of humor are paired with intense commitment and strong work ethic. You will see that Joe approaches problems with an open mind and sharp analysis, and once he has charted a path he follows up with effective advocacy like no other. But perhaps most important, Joe strongly believes in this country’s IP system, and is committed to improving it for the benefit of innovators and AIPLA members alike.

I urge you to welcome Joe as President, and to reach out to him with your support. And to Joe, I congratulate you and wish both you and the Association the best of success over the next year. 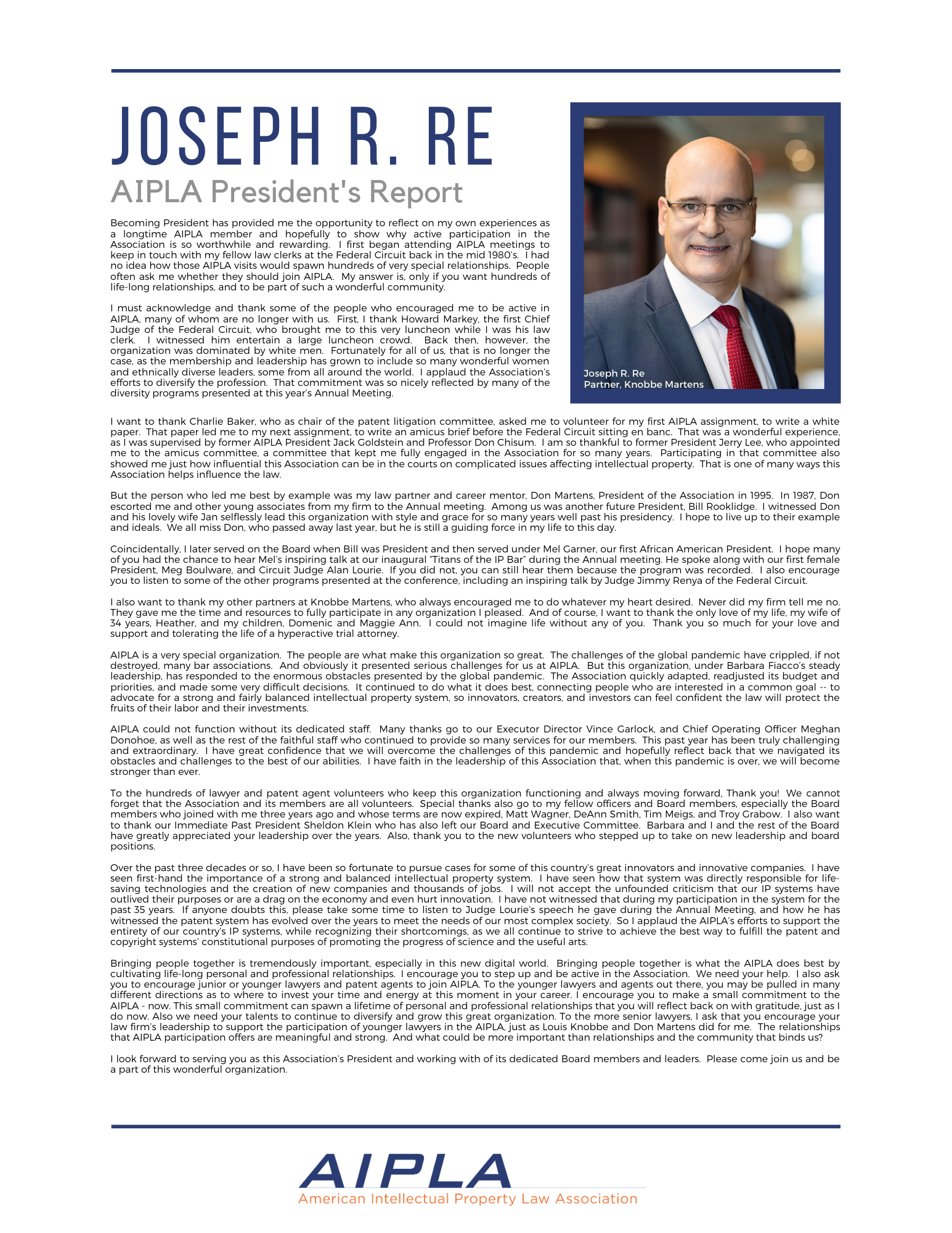